Have you ever wondered how your favorite animation or video game is so life-like and realistic? Well, it’s probably because the developers used motion capture hardware and software, like the ones designed by Rokoko, our latest members!

We had a chance to speak with Petros, the Administrative Director of the Greek tech hub of Rokoko in Athens. He shared with us how it’s like to work with Rokoko, the competitive advantages of their tech products, and how online platforms help to build a digital community of creators.

Motion capture is the process of making human (and sometimes animal) motion digital. With the help of optical sensors or in Rokoko’s case, small sensors, an actor transmits the motion data to a computer. The captured data is then used for animating 2D or 3D models. In-game development and filmmaking, motion capture is an unparalleled method for making animated characters move more realistically. Rokoko has developed the Smartsuit Pro and the Studio software in order to deliver a complete service.

A Danish Startup in Athens

The Rokoko headquarters and the company’s supply chain are based in Copenhagen, while in Athens there is a tech hub focusing on tech support and software. Petros explained how the Greek branch sprang in Athens back in 2015. It all happened by chance! Some members of the Danish team visited Greece for a private event and met a Greek developer. At first, they started a loose freelance collaboration. As the time passed, the team grew organically from five to twenty people! The Greek company was officially set up in 2020 and has been expanding since then.

So what’s it like to work for a tech startup in Athens? Petros noted that Rokoko is a startup in a scale-up process. Growing “from 5 people to a village” means that things are constantly in flux. A tech-oriented and relaxed work environment in the center of Athens proves truly exciting, especially for young professionals. Another appealing asset is that working in a creative tech position means that one must take ownership of the projects. It’s also really interesting that Danish and Greek cultures clash so it’s kind of a shock for Greeks who are used to a hierarchical system in the workplace. Adapting to a horizontal work culture means that team members can go with the creative flow and enjoy a relaxed environment.

Some ongoing research projects might be used for commercial reasons or might be thrown away. That’s how innovation works and this is one of the most exciting aspects of working for a tech startup like Rokoko, according to Petros.

Making technology accessible to all creators

But how is innovation transferred into the market? Rokoko’s main competitive advantages are accessibility, affordability, and the way it offers a full-body tracking solution, covering body, fingers, and face. Big studios use point systems of reference that a camera has to detect for motion capture. Rokoko, on the contrary, developed hardware that uses sensors on the  Smartsuit Pro and the Smartgloves, which do not require a camera. As a result, the whole operation is much more affordable. This is the reason why Rokoko equipment is accessible to small and independent creators who make up more than 80% of the company’s customers. In addition, using their Studio software to gather all the data, you can get hyperreal results straight into your screen! Petros also revealed to us that we should expect much more to come in the future.

One such upgraded product is the Smart Suit Pro II that will be out in early 2022 and anyone can pre-order already!

Can you imagine being able to impersonate your favourite video game character? Well, Shutter Authority’s VFX videos are #madewithrokoko!

Are you a fan of Lil Nas X? His video clips are #madewithrokoko!

How to bring creators together? Petros underlined the importance of scaling up the digital community that Rokoko has been building. Users share stories on Instagram adding the hashtag #madewithrokoko while all creators can interact and share tips through a Discord channel. Rokoko’s customer base consists mainly of independent creators so bringing them together in an active and sharing digital community is crucial for strengthening their voices. Apart from learning more about possible ways to create content, another incentive for creators is the chance to win hardware and software prizes (last year the company awarded one of the biggest bundles ever)! In a digital world, there is no need for a formal submission so #madewithrokoko is all that it takes to register!

Rokoko established a tech hub in Athens just before the pandemic. Because of that, they didn’t have the chance to host any networking events. Open innovation is one of their values, so Petros highlighted their effort to cooperate with universities. They try to approach educational institutions so that students can do their academic projects while getting professional experience in Rokoko. The buzz expected from the launch of the Smartsuit Pro II is going to be huge so more events are coming both in Athens and abroad! We are beyond lucky to have them in our workspace and we can’t wait to see what realities they’ll take us next!

We open our offices to offer you value! In a previous article we introduced the philosophy behind our “Open Office Hours” initiative. We are excited that more professionals at Stone Soup are coming on board, making their time available to you and are happy to share their knowledge and expertise! 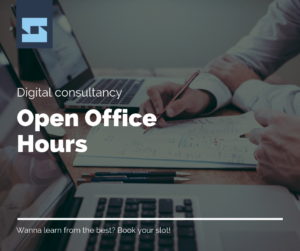 Today we will present Dimitris who is up for offering consultancy on web development and information architecture.

Technology is deeply rooted in our life and as we start a business, the online presence of our company and products is essential to make such business successful. A web developer is a crucial component to that success and for that reason our resident, Dimitris Perdikopoulos could help you understand the fundamentals and how you could move forward and evolve your online presence and most importantly your website.

Dimitris is a front-end developer with an professional experience of 8 years. He shares knowledge and studies both in web development and graphic design and has worked for several design studios like Bod Studio, G Design Studio, Kanella, before choosing to become a freelancer, and has had clients like ID&T, gregorys.gr, Eurobank.gr amongst others.

Through the lens of a specialist 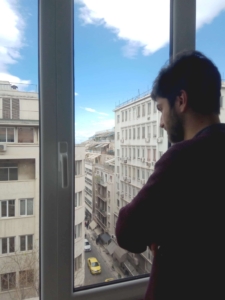 Dimitris states that the most common challenge he faces in his work is that many clients ask for a website, because they believe they are supposed to have one, but without having first figured out what is the purpose of its creation. He supports that there are a number of questions we should answer before we decide to expose our business online.

Questions like; What is the need we want to cover when creating some digital appearance; what is the target group and what is the message we would like our audience to receive when looking at our page, will help us better organize and create our content as well as handle things like SEO. However, it takes a mentality of information architecture to transform in the most efficient way all this information, and present a customized interface that better suits each case. 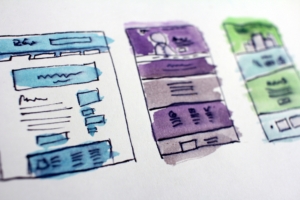 Dimitris embraces this work-style and from the very first conversation with the person of interest he aims to understand their reason for entering the world wide web. Based on that he will come up with a unique system for them and visualize their requirements.

Thus, if you are in a point that you are looking for guidance in building your e-shop/ website from the ground up, optimizing/relaunching an already existing website, creating a platform of a kind, or SEO advice, gather your info and questions and wait for his availability to be announced.

In a recent post we touched upon the opportunities derived from the reversed brain drain, a very exciting process to witness happening in Greece the past year. Everyday we feel inspired by the people based at our coworking space and the example they set: fellow coworkers who are traveling around the world carrying with them their social and personal skills, transferring knowledge, and enriching the local markets they engage with.

We are happy to share the latest news from our community and the background of our highly skilled coworking members. We are also thrilled to announce our new venture that is designed to contribute to this positive change. 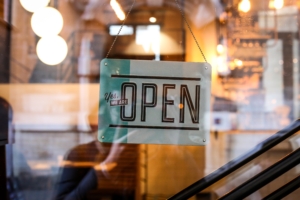 are one-on-one sessions with experts in different fields. The sessions will take place at Stone Soup and they will be open to all, and fees won’t be charged. Their objective is to share the knowledge beyond our walls and to strengthen the Athens Digital Creative ecosystem.

Wanna learn from the best? Let’s cut to the chase, and introduce George Carey-Simos, a Stone Soup resident, and the first expert you are invited to visit during Open Office Hours.

George is a Digital Strategist and helps people and companies use the Internet to their  advantage. Born in South Africa and having spent most of his life in different countries; South Africa, Czech Republic, UK, and Greece, he eventually decided to anchor his life in Greece for good.

He has a solid 15 years of working experience gained from numerous positions in different industries and countries. He started his career in Sales and moved into more traditional Media & Communications and PR work – and worked in the field for several years. Then in 2013, he switched to a small digital agency, running various digital projects for SMBs and large multinational brands, also advising clients on social media and digital strategy as a whole. His passion to explore the cutting edge developments in the digital sphere, also led him to co-found WeRSM | We are Social M 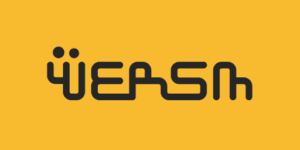 edia at around the same time. It didn’t take long for WeRSM to be recognized for the value it provides to digital marketers of all kinds – and agencies – by keeping them up to date on the latest news, practices, and trends. WeRSM very soon became international.

For the past 4 years, George splits his time between WeRSM and working as a freelancer for his clients. His multidimensional experience gives him the advantage to provide holistic consultancy, project management, and custom training for his clients. He is well-connected, and has a broad network to tap into when he needs to recruit and orchestrate any project.

Apart from his freelance projects, he also runs custom training sessions in digital strategy, social media strategy, and growth hacking. His growth hacking course is taught as part of a series of seminars organized by KnowCrunch at Deree college. Finally, he is also a startup advisor, mentor at Founder Institute, a regular judge at social media awards and startup events, and a speaker at international conferences.

Whether your business is up and running or you are just starting out, the sessions with George could give you valuable insights on your digital strategy, your resource and team management, but could also help you refine your pitch and develop your USP.

We will announce George’s availability and time slots next week.